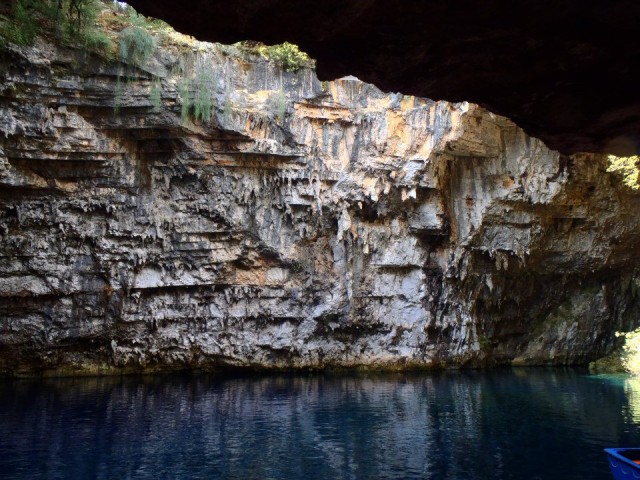 One of the most well-known and truly beautiful sights of Kefalonia, with a prominent historical element, is the lake-cave and Melissani. It’s a lake within a cave in Karavomilos, close to Sami. It was discovered in 1951 by the speleologist Petrochilos and since then, after the process of access building, it has been handed over to tourist exploitation. A large part of its roof has collapsed, so, as a result, a certain peculiarity and uniqueness has been noticed. Especially when the sun reaches its highest point, the spectacle is mesmerizing, since the sun rays are reflected in the water.

In ancient times, the lake was a place of worship of the god Pan and the nymph Melissanthi. The myth says that Melissanthi committed suicide in lake out of sadness, because the god Pan did not respond to her love. According to another version, a little shepherd girl named Melissanthi lost a sheep and while trying to find it, stumbled and fell into the lake. Inside the lake there a small island, where archaeologist S. Marinatos discovered the temple of Pan, artifacts from which are in the Archaeological Museum of Argostoli. These artifacts are a clay figurine of the god Pan, a clay disc depicting nymphs dancing, a clay plaque with a nymph procession and a small plaque with an engraved woman’s figure.

Another phenomenon is also encountered in this lake-cave. Water seeps into the limestone rock, erodes them and cavities are formed in a process called carstification. It was realized in 1963 that the lake-cave communicates with the entire carstic network of the island and this confirmed by checking colored water canalized from the sinkholes in Argostoli to the other side of the island.

Visitors today are toured by boat and one can enjoy the mesmerizing sight of stalactites, crystal clear water and sunlight that co-exist harmoniously.