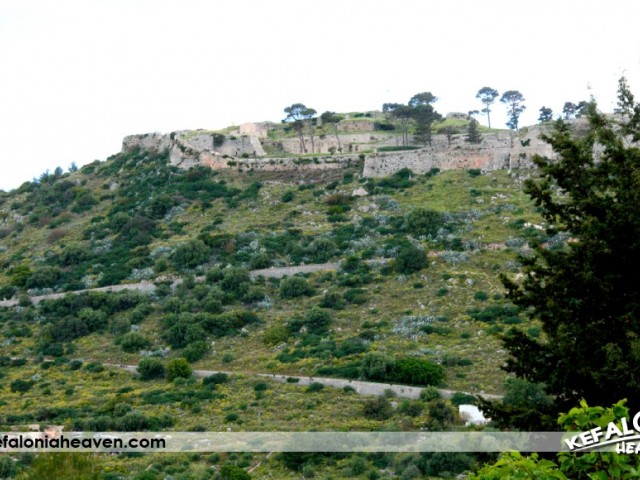 Saint George’s Castle was built on a 300metre high hill, south of Argostoli, at a distance of about six kilometers. It has an area of about 16.000 square meters and 600 meters wall perimeter. It has a polygonal shape and is consisted of three parts: the outer wall, the horseshoe-shaped inner grounds and a rocky peak, in the centre of the courtyard, where the ruins of the so-called Old Fortress are saved.

Its construction goes back to the 12th century A.D. As soon as the Venetians conquered the island, they sought about enhancing the fortress in order for it to be protected from attacks by pirates, who were ransacking the seas at the time. A new outer wall was constructed in 1504 and is saved to this day. Hereinafter addendums and improvements have been made regularly. It seems that the Venetians enhanced the northeastern part of the wall in particular, as well as the section which is across the Proastio (suburb), where the ground is smoother and attacks from there would have been easier. This said because on the side of the Proastio, the strongest parapet was built, while in its frontage, which faces Argostoli, there are embankments 1,70 metres in height with 2 meters wide battlements on them.

The northwestern part of the wall was more poorly equipped. The fortress’ protection on this side was natural because the ground was rough, rocky and steep, so it didn’t offer itself for attacks and the lining of the infantry as was accustomed in those times. In the fortress itself were public and private buildings, churches, food and weapon storehouses, barracks, hospitals, prisons and water reservoirs. There is also information that noblemen’s coat of arms were walled on many buildings. Today one can make out speaking trumpet slots, embrasures for lighter weapons and observatories on the battlements. The remains of a bridge built during the French occupation, which connected the battlements, are also saved. Inside the fortress, on a small square are the remains of a catholic church of Saint Nicholas, where two bishops and some of Kefalonias “provisioners” were buried and a tunnel, starting at the battlements and ending at the Koutavos lagoon in Argostoli, which served the need of an escape route. The fortress of Saint George loses its defensive significance at the end of the 16th century. The island’s defense called for the construction of fortresses closes to the sea and ports. The castle was damaged in the earthquakes of 1636 and 1637. It was the capital of Kefalonia until 1757, when Argostoli became the new capital. The final earthquakes of 1953 caused much damage. Today, there are few houses and the residents stay in a more closed society out of sentimental reasons. Recently, endeavors are being made for the restoration of buildings and monuments which were hit by the earthquake, as well as for general conformation via its characterization as a traditional and preserved settlement. You should know that one can reach the castle of Saint George by bus or car from Argostoli and the distance is 8 klm. The route from Argostoli goes through the area of Krania, on a road which has recently acquired housing development, deteriorating the purely rural element of the area. Upon entering the village of Peratata, there is a road going uphill from which the visitor will see the majestic castle. Before reaching it, there is a road on the left which leads to Troianata and to a small church, which was recently restored in memory of the old church of the pre-earthquake settlement.

The view from the hill, and even better from within the castle, is mesmerizing.