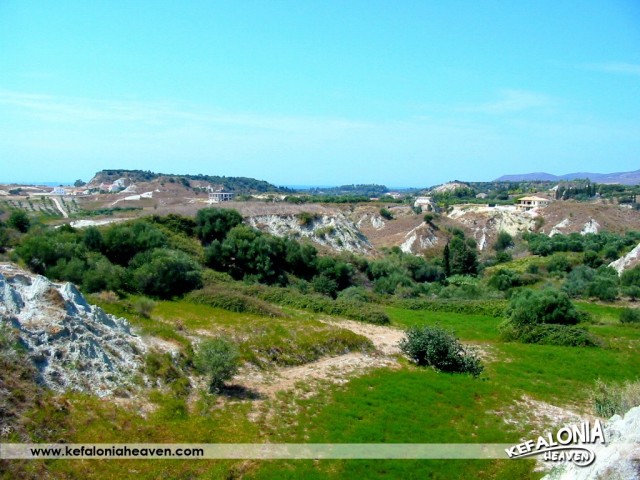 Stone mass on Maspali Hill. The points where material had been extracted using mining tools are visible. The hill named Maspali is situated south of the village Mantzavinata on the Paliki peninsula, in the Prefecture of Kefalonia, close to the settlement and on the left side of the road that leads to the Xi area. It is a massive hill consisting of clay-like material on its northern section and porous limestone rock on its southeastern part. As a matter of fact, this great bulk of rock looks like a castle from afar, resulting in some visitors talking about “a castle on the hill”.

The hill’s rocky material is can be used for construction projects. Thus, residents of the area exploited the material turning the hill into a quarry, when is unknown. It’s possible that rocks were extracted from Maspali during ancient times, but on a smaller scale.

There are records from the beginning of 1900 indicating that Maspali with its rocky mass became a quarry and supplied the town of Lixouri for the construction of houses and public buildings. The mining of the porous material left great openings and pits, which confirm the efforts of older constructors who cut out stone by chisel and hammer and transported it to Lixouri by carriage in order to be sold.