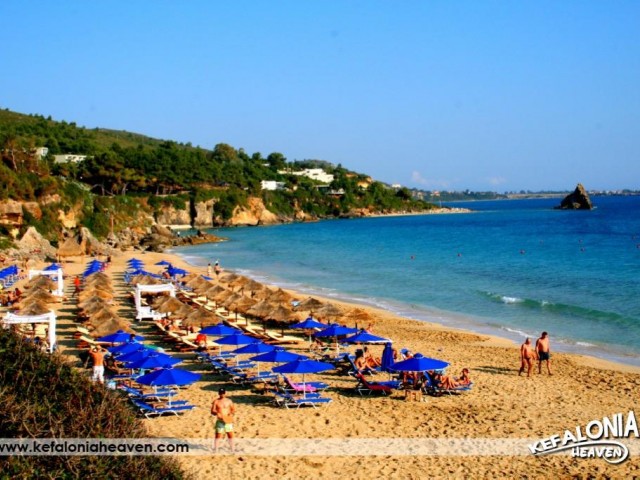 Just 3 km. outside Argostoli, in the area of Lassi, are two of the most beautiful and secular beaches of Kefalonia, Makris and Platis Gialos. They are sandy ( finely grained), without rocks and pebbles, with blue and crystal clear waters.
Makris Gialos has quite a length (which is probably the reason why it was named that way *makris=long*) and, at the same time, is situated in such a location that it remains clean all year round. It is one of the main tourist attractions, since it is one of the most organized beaches in Kefalonia. It has quite a few beach bars, restaurants, water sports and a lifeguard.
The natural extension of Makris Gialos is Platis Gialos, from which it is separated by only a few rocks. As a result, going from one beach to the other by either walking or swimming is possible. Right across, you have a view of the vast blue of the Ionian and the Turkopodaro beach, as well as the Paliki peninsula and the Vardianoi Islands, the latter at a greater distance.
They are awarded a Blue Flag every year for their cleanliness and they are known for the yellow sand they have along their entire length. Most locals and visitors choose these beaches not only because they are close to the capital, Argostoli, in the area of Lassi, with many tourists and on the road to the airport, but because these lovely beaches combine everything one could desire during their holidays.
There are many bus connections to these beaches from Argostoli during the summer months, but taking a taxi is also quite thrifty, as they are located in a short distance from Argostoli.