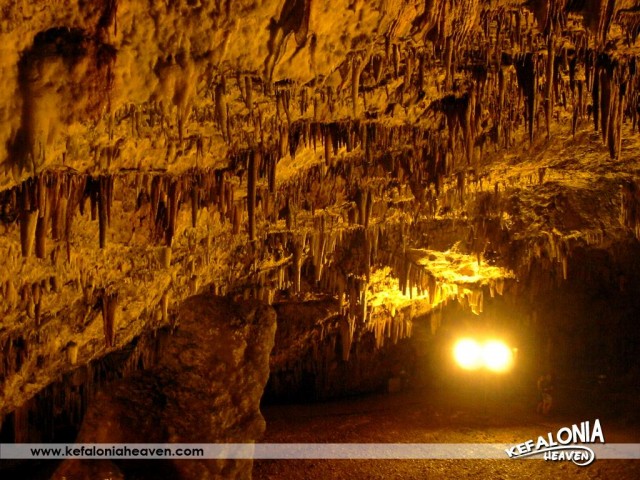 Drogarati Cave is one of the biggest and most beautiful natural sights in the area around Sami and of all of Kefalonia. It’s at a short distance from the lake-cave of Melissani, belonging to the same geographical region. It was discovered about 300 years ago, when during a big earthquake, part of it collapsed and revealed what is today the entrance of the cave.

Its depth is about 60 meters, with an average temperature of 18°C and 90% humidity, as with all caves.

According to archaeologists, Drogarati is over 100 million years old. The part of it that is accessible is only a section of the entire cave and it is thought that it’s probably connected to other caves or cave-like formations of the area. There are many stalactites and stalagmites, created by water which upon passing erodes the rocks materials and places them at the end of the stalagmite. It is estimated that its size grows about 1cm every 100 years. Earthquakes and human intervention have contributed to the fact that many of them are cut. The image upon entering the cave, though, is breathtaking nonetheless.

Drogarati is open to visitors all year round and a few years back, quite a few events had been held in its 900 square meters hall at its entrance, due to its excellent acoustics. It is one of the few caves where intense lighting has been allowed so that the visitor can admire the majesty of what nature has created.